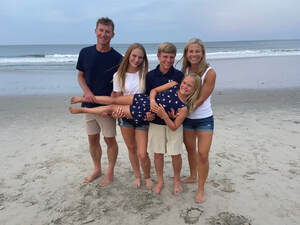 Jen grew up in Rochester, NY where she played soccer, basketball, and softball. She attended the University of Pennsylvania where she earned a Bachelors degree in Economics and a Masters degree in Elementary Education. Jen stayed in the Philadelphia area and taught fourth grade for six years before starting a family in 2005. She now has three children whom she feels blessed to be able to stay at home with each day.

Jen and her husband moved to Quakertown in 2003 and greatly enjoy the area. In the fall of 2007, Jen's brother-in-law Kevin challenged her to a neighborhood softball game. She took him up on it and a year later, after interest from other local neighborhoods who wanted in on the action, the first Pride of Quakertown event took place: a one day, double elimination softball tournament. Jen feels very passionate about helping the youth of the Quakertown community and is proud to serve as the Vice President of POQ. 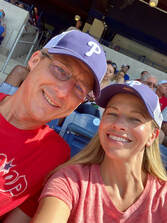 Steven grew up in Warminster, PA and attended the University of Delaware where he earned a bachelor’s degree in Business Administration and a minor in Management Information Systems. Steven worked a few years after college as a computer consultant and has since worked as a mortgage banker. He is currently a Senior Vice President at Finance of America Mortgage in Conshohocken, PA.

Steven and his wife Jen, moved to Quakertown in 2003 and feel it's a wonderful place to live. He has three kids and enjoys coaching and watching them all play sports.

Leigh Ann has lived in Quakertown with her husband and two children since 2003.  She grew up on the Jersey Shore and moved to Bucks County in 1997 to attend Graduate School at Villanova and pursue a degree in Counseling. While in school she met her husband Rich and made plans to stay in the area.  Leigh Ann currently works as a Behavior Specialist in the North Penn School District and enjoys the challenges and rewards of her job.

Prior to this position she spent time working for other non-profit organizations such as the Network Of Victim Assistance and Foundations Behavioral Health.  She also participates in the Fresh Air Fund Program, serves as a member of the Upper Bucks Youth Aid Panel and has volunteered with Musikfest in Bethlehem for over 12 years.